The circuit reproduced below is one of my very first transmitters I built in the early 1970s.  It is reproduced for educational use from the Australian magazine, Radio And Hobbies May 1946.  (note, later the magazine was called Radio Television and Hobbies and later still it was called Electronics Australia.)  The design by John Moyle VK2JU ((1908-1960) was an engineer, editor, music and art lover) was classic of all post war designs at the time.  The vacuum tubes can be thought of as Mosfets today (with no requirement for filament)  The oscillator circuit is called an Electron Coupled Self-Excited Oscillator.  The upper most grid acting as an anode at ground potential to RF and the electron coupling between that screen grid to the anode and finally the output taken from the anode.  This provides some buffering of the output and stops frequency pulling from the following stage.  The overall design of the Oscillator is of course a Hartley, with it’s classic tapped coil for feedback to the cathode (source)  The first grid being equal today to the gate and the anode being the drain.  A conventional Hartley oscillator built with a triode here would not be as stable as the ECO type of oscillator.  Note the zero external bias associated with the first grid, the cathode (source) being at zero volt potential.  A Hartley oscillator can work between grid and cathode or between anode and grid or anode and cathode.  There are numerous configurations with Hartley oscillators and this ECO is just another of these. 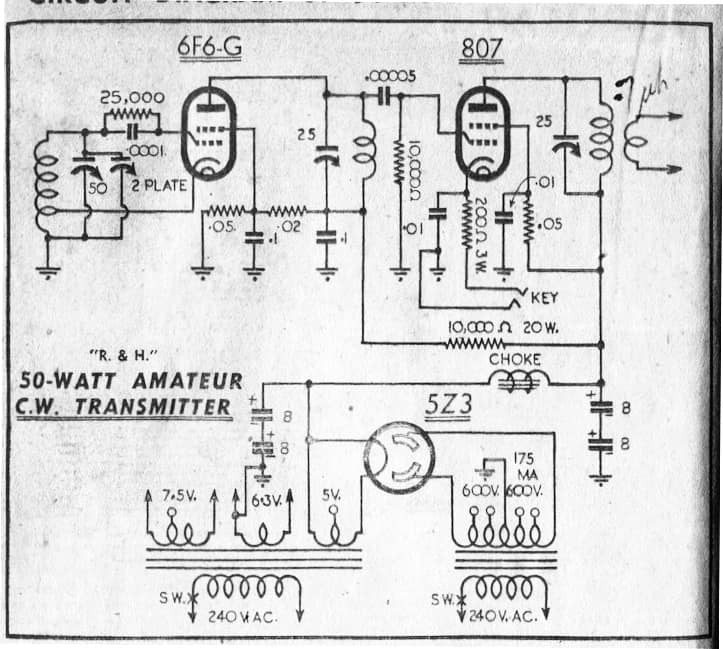 The printing in 1946 was on a high acid paper which 72 years later is quite brown. The original photos in the magazine are no better than the high resolution scans I took. 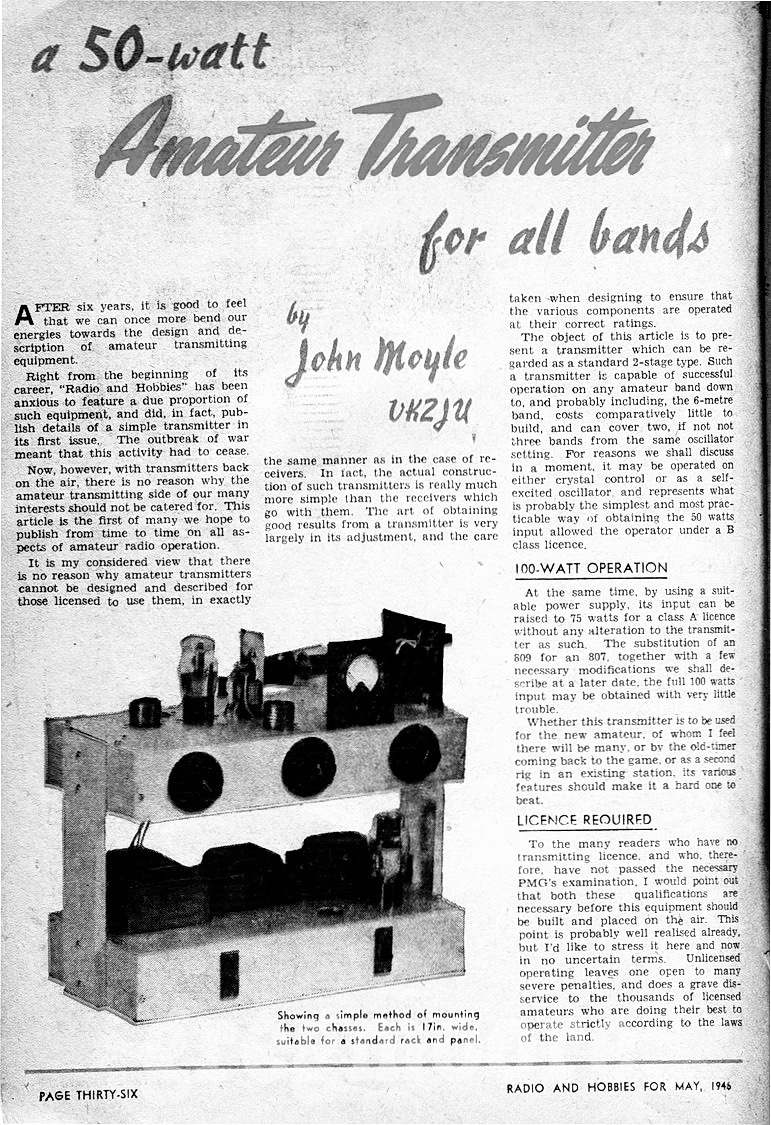 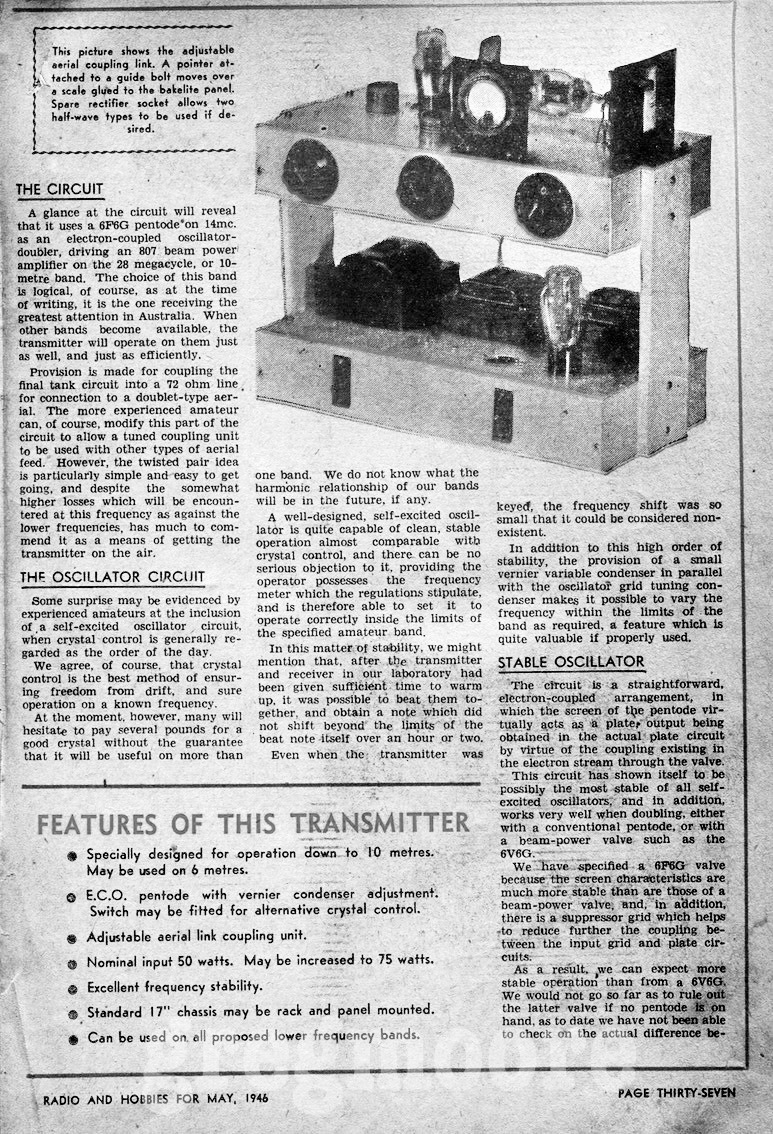 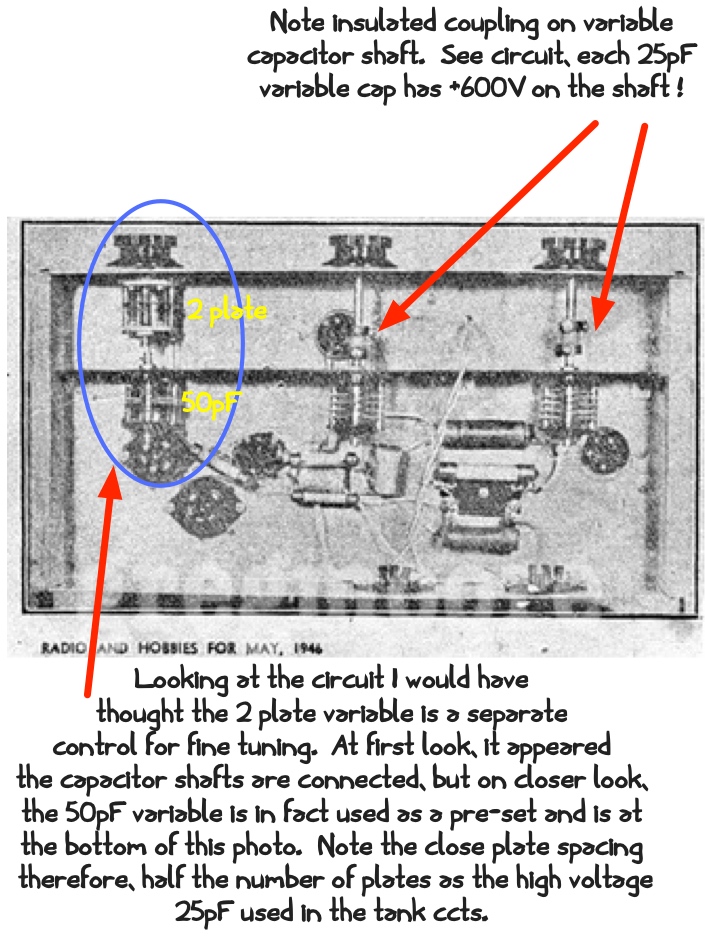 The 50pF cappy across the oscillator coil provides for a high C for better frequency stability. Note the small oscillator coil which is used with the larger capacitor values, providing a nice LC ratio.  See on page 37 in the ‘features’ column – ECO oscillator with vernier condenser adjustment. 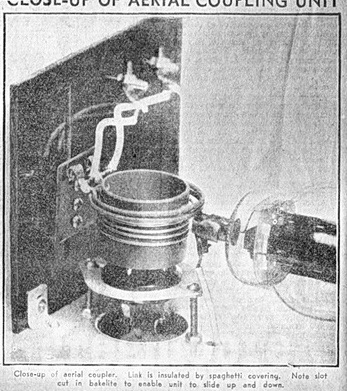 The high voltage tank coil connected to the power amplifier anode. The antenna coupling link around the tank coil is made adjustable via a slot cut in the plastic support. This very primitive type of output connection would be full of harmonics at still considerable power levels! With a design resonance at 28.5MHz, we would see harmonics at 57MHz and at 14.25MHz. And even subharmonics above and below these. It’s only then a suitable antenna feed and hi-Q antenna system which would suppress these harmonics. Later designs used Pi-couplers for output stages with much better filtering 🙂
I plan to build this with Mosfets and or BJT and set it for around 7MHz for show and tell. At 7MHz I don’t need such low value capacitors, and some old cannibalised valve radio capacitors will do the job nicely. I can’t match the ECO oscillator, so a conventional Hartley will have to do 🙂

One big disadvantage of this 50W transmitter design today is that when ‘de-keyed’ (it’s a CW transmitter) the ECO output is probably in the order of at least 1 Watt.  That would smother the front end of any nearby receiver.  There would need to be way to kill the voltage to the oscillator when in listening mode on the receiver. 🙂